Not Sleeping Enough in Middle Age is Linked to Dementia, Study Finds 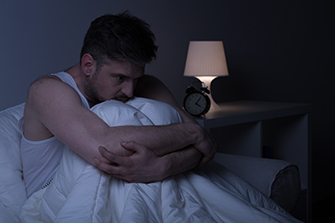 According to a new study published in the journal Nature Communications, getting six or fewer hours of sleep a night can be linked to many health issues including Dementia. If you are a night owl, suffer from insomnia, or otherwise don’t get a full night’s sleep consistently, you might be setting yourself up for failure down the line. Keep reading to learn more about Dementia, how not sleeping enough is linked to it, and how you can start improving your sleep tonight.

Dementia is not a specific disease but is instead a general term for the impaired ability to remember, think, or make decisions that interfere with doing everyday activities. Alzheimer’s disease is the most common type of dementia. Though dementia primarily affects older adults, it is not a part of normal aging.

Facts about Dementia include:

Signs and Symptoms of Dementia

Dementia symptoms can vary from person to person, depending on the type of dementia the individual suffers from and other various factors. However, people with dementia have problems with:

Signs that may point to dementia include:

The Link Between Sleep and Dementia

After following nearly 8,000 people for 25 years, the study found a higher dementia risk with a “sleep duration of six hours or less at age 50 and 60” as compared to those who slept seven hours a night. In addition, persistent short sleep duration between the ages of 50, 60, and 70 was also associated with a “30% increased dementia risk,” independent of “sociodemographic, behavioral, cardiometabolic, and mental health factors,” including depression, the study said.

“Sleep is important for normal brain function and is also thought to be important for clearing toxic proteins that build up in dementias from the brain,” said Tara Spires-Jones, who is deputy director of the Centre for Discovery Brain Sciences at The University of Edinburgh in Scotland, in a statement. Spires-Jones was not involved in the study.

“What’s the message for us all? Evidence of sleep disturbance can occur a long time before the onset of other clinical evidence of dementia,” said Tom Dening in a statement. He heads the Centre for Dementia at the Institute of Mental Health at the University of Nottingham in the UK.

Links Between Sleep and Dementia, From Other Studies

How to Get Better Sleep

Start When You Wake Up

Getting better sleep at night all begins from the moment you wake up. Rearranging your schedule to do different things at different times can make all the difference in your sleep. Some of these include:

Get Checked for Sleep Apnea

Sleep apnea is a condition marked by abnormal breathing during sleep. People with sleep apnea have multiple extended pauses in breath when they sleep. These temporary breathing lapses cause lower-quality sleep and affect the body’s oxygen supply, leading to potentially serious health consequences. Sleep apnea is one of the most common sleep disorders in the United States. It can affect children and adults, and people of both sexes, although it is more common in men.

Sleep apnea can disturb sleep and cause frequent awakenings. This can lead to 6 hours of sleep or less, ultimately leading to issues down the road with dementia. Since sleep apnea is so common among middle-aged men, it is very important to check for sleep apnea and get treated.

About Gorman Health and Wellness

Dr. Gorman is a part of the breathing wellness movement, which aims to increase awareness and improve treatment for sleep-related airway conditions like sleep apnea. He has partnered with organizations focused on collaborating with dentists to apply the sciences of Craniofacial Epigenetics (the study of cranial modifications caused by gene expression as opposed to genetic code alteration) and Pneumopedics® (the practical application of oral appliance therapy and non-surgical airway remodeling) in the management of sleep apnea.

Together, the application of these sciences allows for underlying causes of airway obstruction to be treated in 98% of cases, resulting in a high success rate among sleep apnea patients. For every sleep apnea case at our practice, Dr. Gorman will gather patient data and determine the patient’s specific needs based on home sleep test results, dental impressions, CT scans, and images. Our state-of-the-art technology, paired with Dr. Gorman’s experience with sleep disorders, allows him to find the most effective treatment plan for each individual’s particular case, yielding improved daytime and nighttime breathing for the patient.

“I have been helping people suffering from Sleep Apnea with a non-invasive, clinically approved treatment method. This method has allowed my patients to sleep with far fewer events per hour allowing them to get rid of their CPAP and BiPAP machines. Imagine not having to use one of those machines, getting back a much greater quality of life along with the benefits of being able to breathe better.” – Dr. Gorman.

For more information on Dr. Gorman, improving your sleep apnea, and decreasing your chances for dementia, contact us today.